Had trouble finding low pro mount to produce size I wanted but this is 140 in on 10 ft wall. Self built screen. Love this projector! 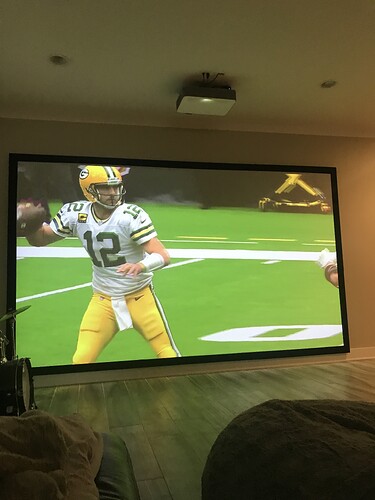 What’s the mount you used? Any pictures of how it is secured to the projector?

2.44 inches from ceiling which was shortest I found.

Look at the pics on the amazon listing to see how it connects to projector- the arms screw right into bottom of projector.

Thanks! My Vava doesn’t have any screws visible, but there are several holes plugged with rubber - I’m guessing I just remove a few of those and pick the holes that will fit it best.

I haven’t opened my box yet to see or feel this (Original Kickstarter backer and have had this for a LONG time without trying it out), but was wondering about how much play there is in adjusting the height of the projected image. I want to ceiling mount our Vava but the ceiling is slanted and is 20 feet tall. I’d want to project down about eye level, but don’t want to have a projector hanging 10 feet down from the ceiling. Is there image correction so that I could angle it downwards with a near ceiling mount to reach the 140-150 inch capacity and still keystone correct? Thanks!

I see that you have screen below the base trim… we’re you not able to project higher up?

Right - so I used the low profile mount that claimed 2 inches of hight but it’s more like 4 inches. I don’t want to try and flush mount or I won’t be able adjust. The result is even on 10 ft ceiling at 140in screen I’m below my trim. I might may cut away the dry wall for 3/4 in or mount on a pole that’s secured to a solid price of wood screwed between the joists and adjust the pole and mount height to end up nearly flush with the ceiling. At best I get 3-4 inches back and I can mount just above the trim.

The screen was built when the machine was on the ground so I could have gone smaller and mounted closer to the wall had I built it after mocking it up on the ceiling but all in all no complaints.

Hi @JMA_Vava We appreciate your support for the VAVA 4k UST Projector and thank you for sharing your current setup with your VAVA 4k projector. If you need further assistance, you can also email us at support@vava.com.

Hi - which projector is this? Can all Vava projectors be mounted on ceiling? I’m looking into Vava 4K uhd ultra short smart projector, can I mount that in ceiling? I see all pictures showing from the floor. Also do I need a special screen if I will mount on ceiling? Thanks

Hi @Madinaed We appreciate your interest in our VAVA 4k UST Projector. Our VAVA 4k Projector can be ceiling mounted and any universal ceiling mount with adjustable arms that can support at least 33lbs will work with our projector. No special screen, just the screen for UST ALR Projector Screens. If you have any further questions or concerns please contact us at support@vava.com. Thank you!

This isn’t entirely accurate, just so you know. There are lots of universal ceiling mounts with adjustable arms that don’t stretch enough to reach the screws on this Vava Ultra 4k. You’ve got make sure you’ve got enough length on the mount to reach that diameter that is well over 12". 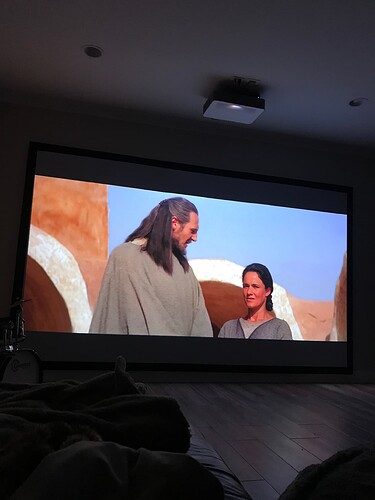 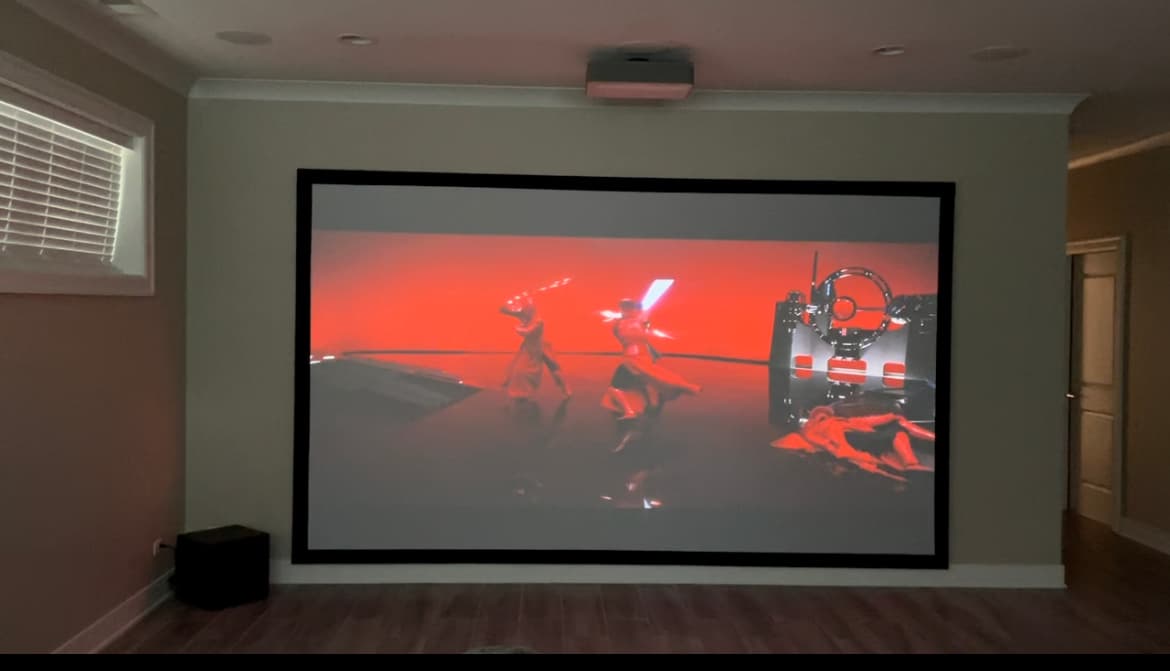 Removed rubber extender on body of mount and got almost flush- makes super hard to tighten screw but got some space back. Added atmos speakers 7.7.2 setup and the vava is rocking. No issues with length of arms on the mount I linked in earlier post.

looking for help on ceiling mount - mount type (any recommendation from Amazon?) and also the exact measurement in terms of distance from wall and ceiling for a 135 inch projection. The user manual provides specs when placing the projector on the table. Can the same specs be used when considering a ceiling mount?

I posted this back in Nov (see below) - I love the mount and its still available. If you take out the rubber spacers on the arm you can get it close. It says 2.44 in -not sure but it’s too small to even tighten the rotation screw so you have to do that before mounting - don’t over tighten because the unit has to move a little. In the end unless you recess the unit into the drywall, I don’t think you’ll get much tighter

2.44 inches from ceiling which was shortest I found.

Look at the pics on the amazon listing to see how it connects to projector- the arms screw right into bottom of projector.

Thank you. Weirdly, the unit is showing as not available for me. I will keep checking.

Any idea on how far away from the wall this needs to placed (believe should be the 0.233:1 ratio) and what would the distance between the projector and the image?

Ill measure but I want to say its about 2-4 feet from the wall. Its a huge room so its really close but the screen is like 140 in